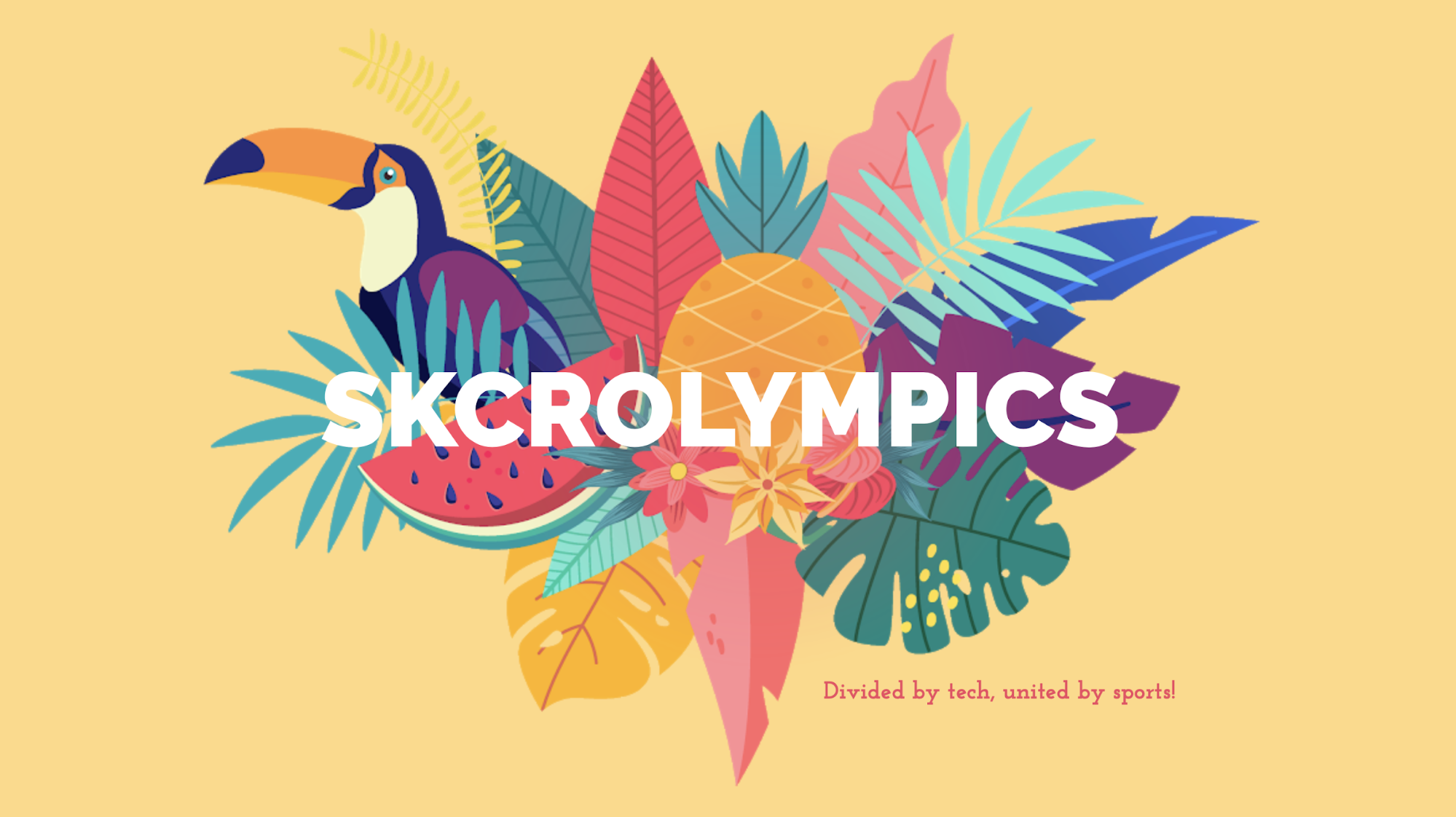 Back in the good old days, when we could meet, team activities were Uno, or cricket, or Secret Hitler. But now, going remote, like most of us during the lockdown, we were BORED and craving for human interaction. So we hosted the Skcrolympics! A one of a kind, online friendly, mini game tournament.

Hey remember when you could throw a ball around with your teammate to blow off some steam? No?

Me neither! Because it’s been 6 months since the lockdown! When will this end?!

Back in the good old days, where we would travel for a place called work, we played so many games like Uno, cricket, Secret Hitler, punching Juge, throwing water on Juge, kicking Juge and so many more unique Juge assault games. But now, we crave for human interaction!

Going remote is hard. There’s a lot of processes that need to be updated and that includes the fun at work. So, we hosted the Skcrolympics - a one of a kind, online friendly, mini game tournament. 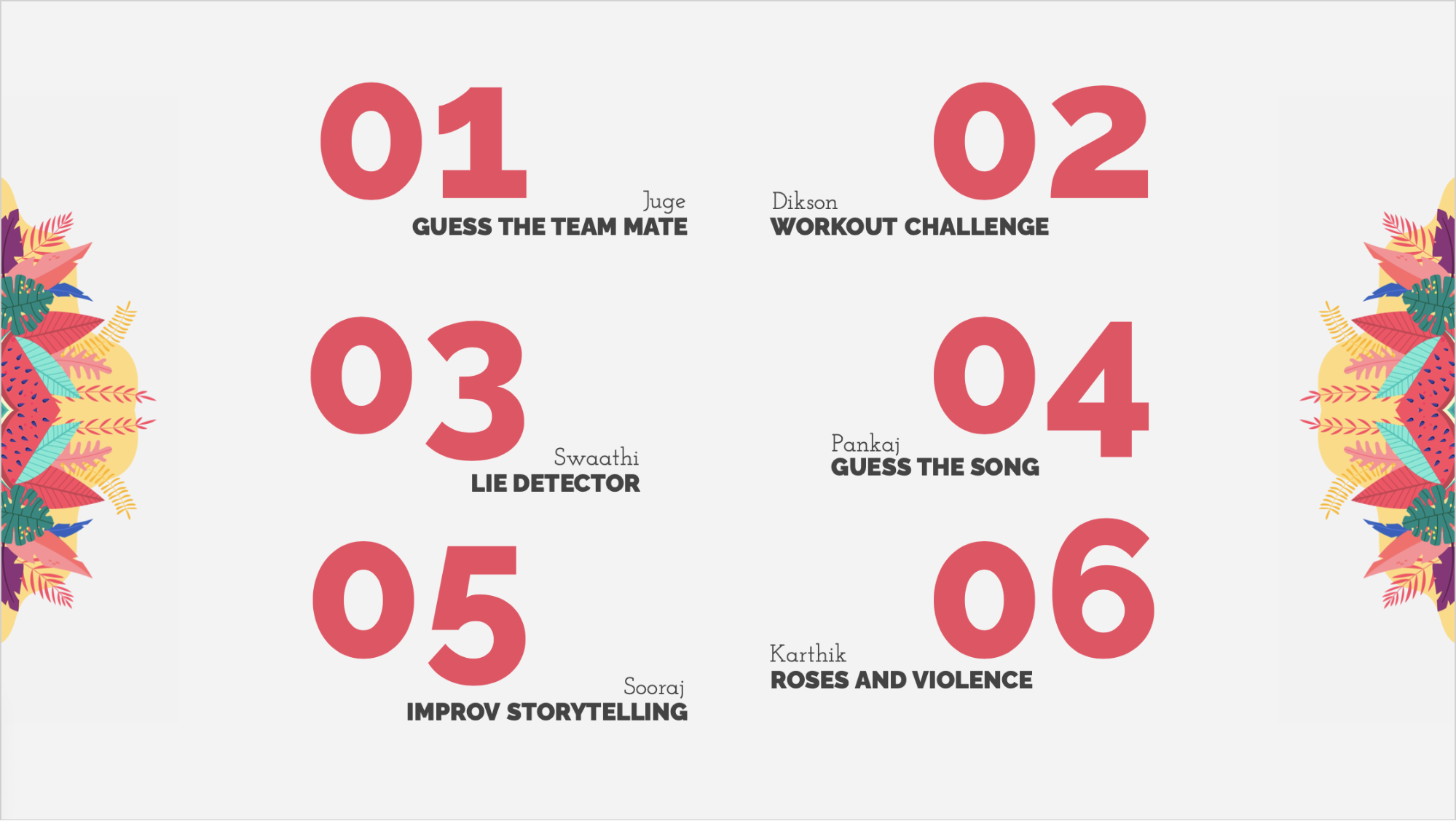 So, Skcrolympics is a 6 event tournament. You can choose to have one host for all the 6 events, or to make it more fun, we had a host for each event. We then split up the team randomly into 6 teams, and assigned each one to an event. Skcrolympics is a tournament, so the winners from each event go on to compete in the finals. 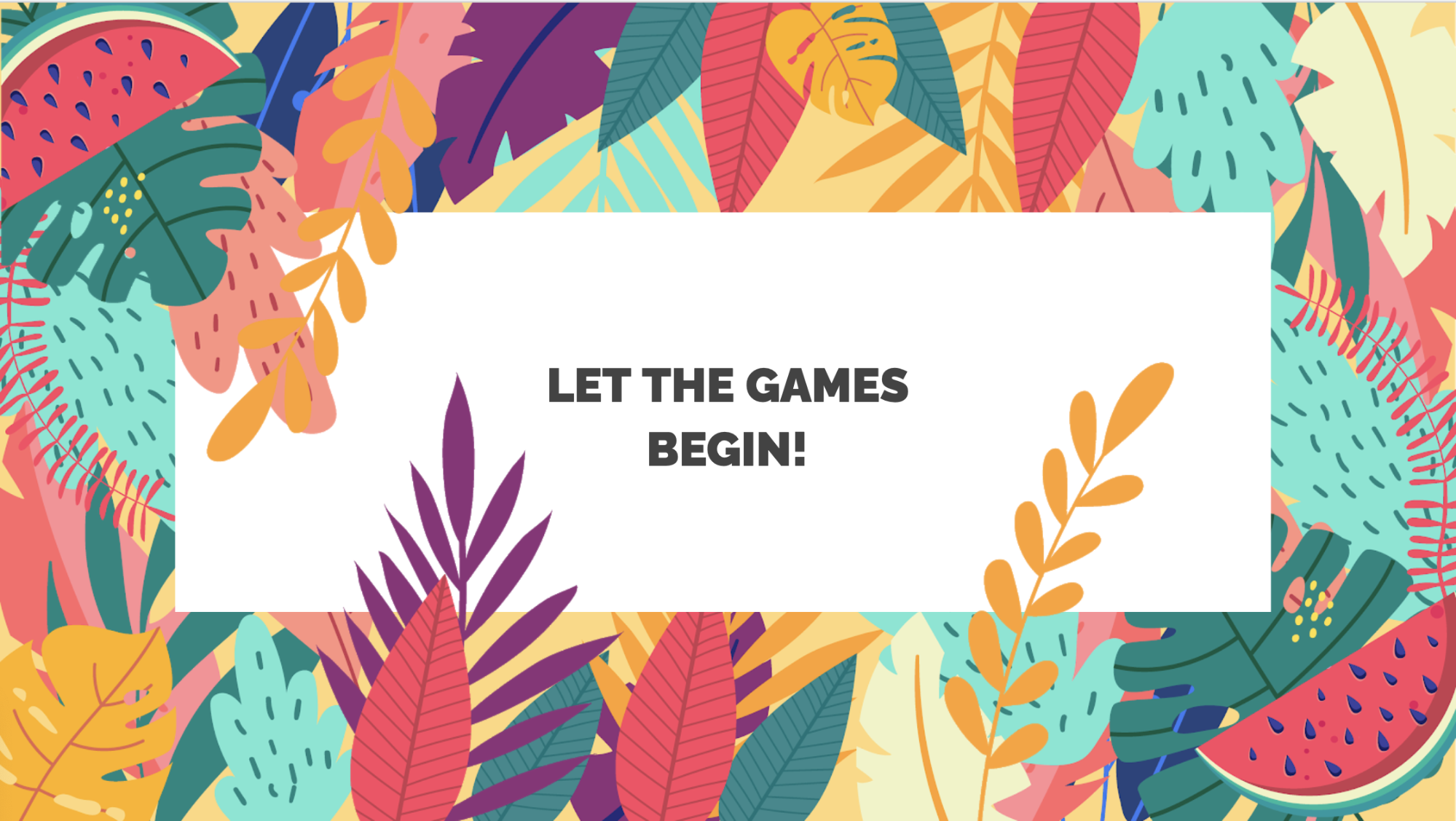 Now, this sounded great in theory, but since we spend way too much time with each other, it was too easy. The next time we do this, we’re probably going to reveal a word instead of a fact about the mysterious teammate. 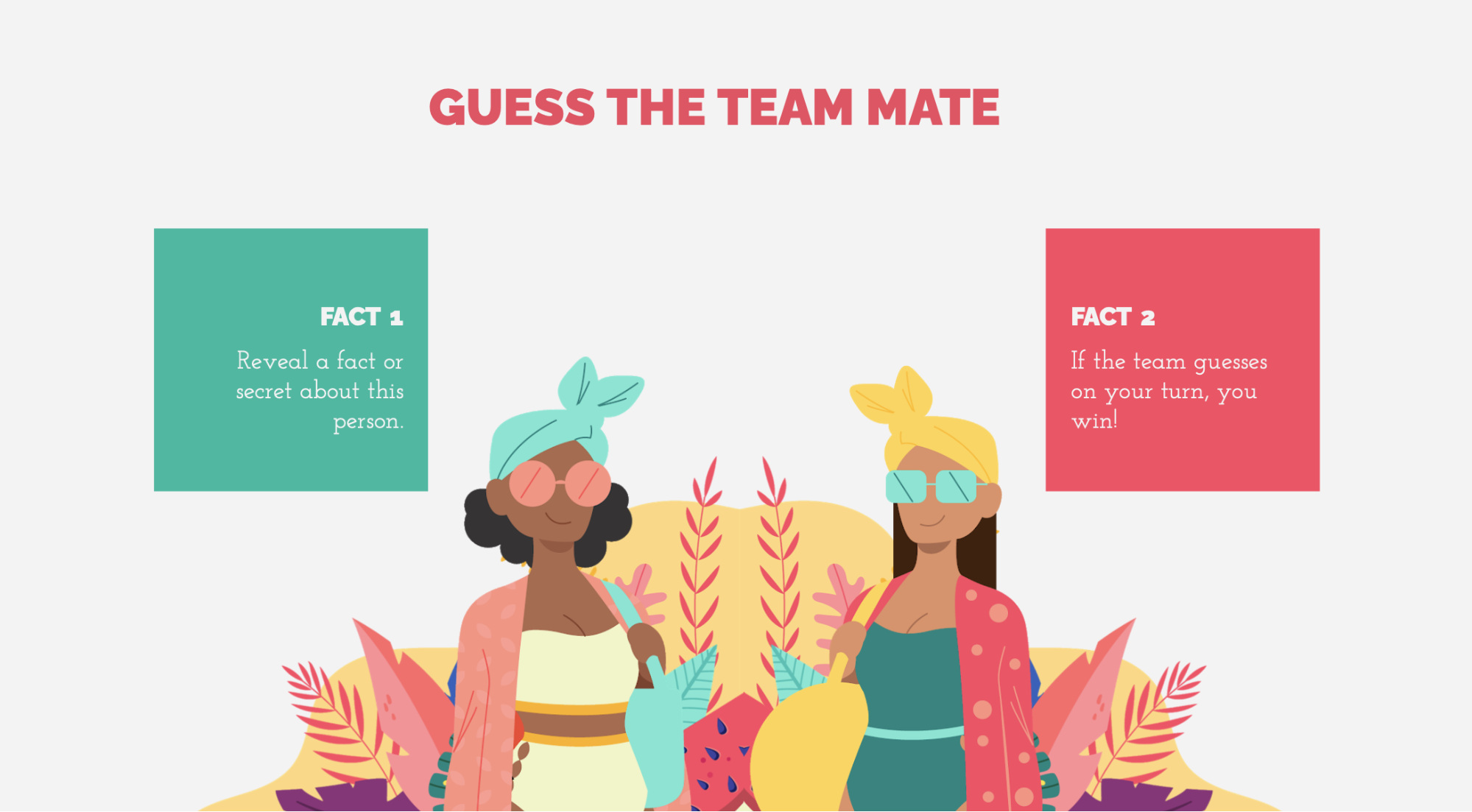 I’m sure all of us are at peak health after 6 months of staying at home. So this event was interesting - and painful! The contestants compete against each other and whoever lasts the longest, wins! 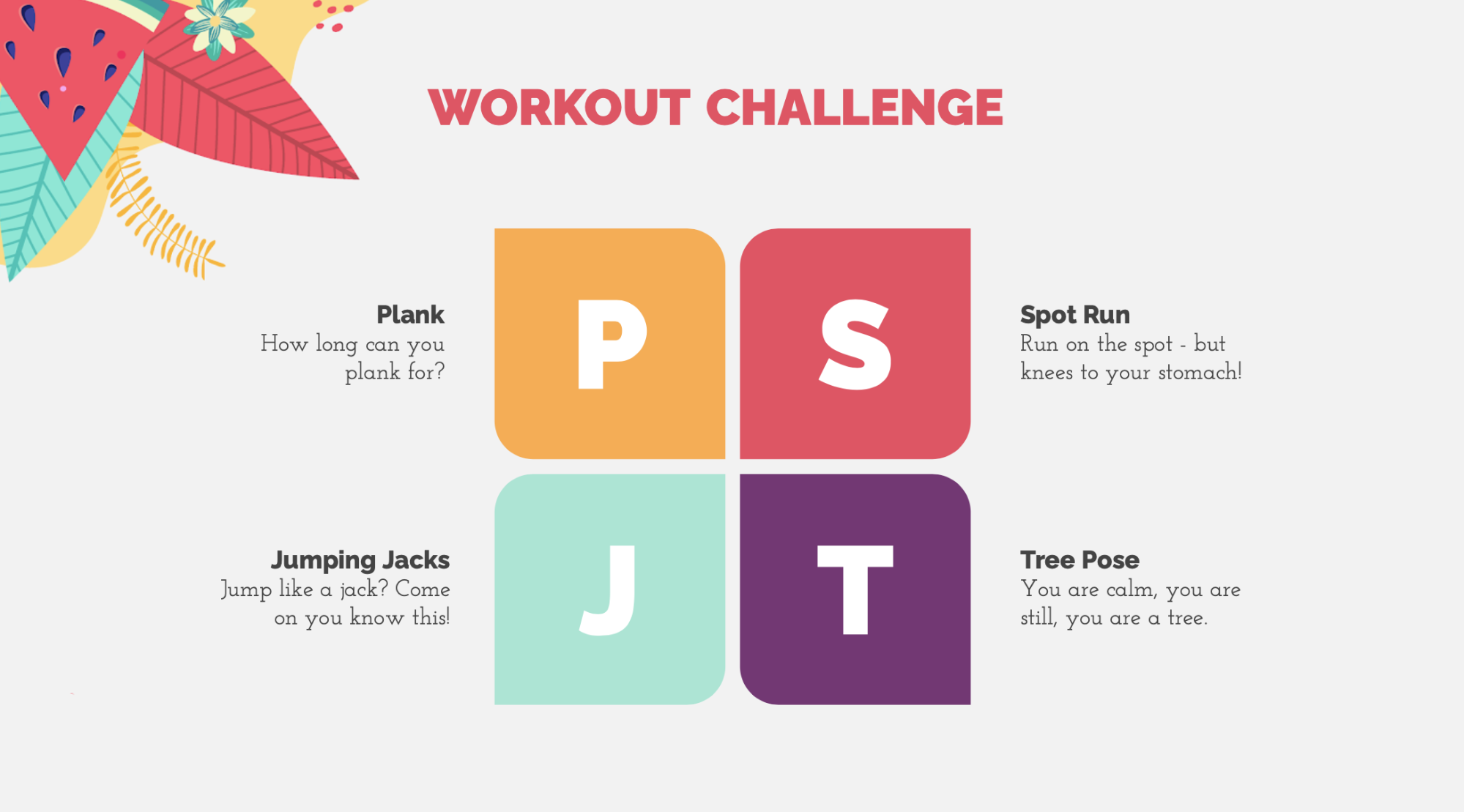 But let’s hope your workout challenge goes better than this,

This game was inspired by Jimmy Fallon’s True Confessions. Everyone in the team needs to send the host one embarrassing, funny or outrageous true story that no one else knows about. The game begins with the contestant reciting a story assigned to him/her by the host. The host can either assign the story the contestant sent in, or any other story. The objective for the contestant is to convince the team that the story they’re reciting is real. 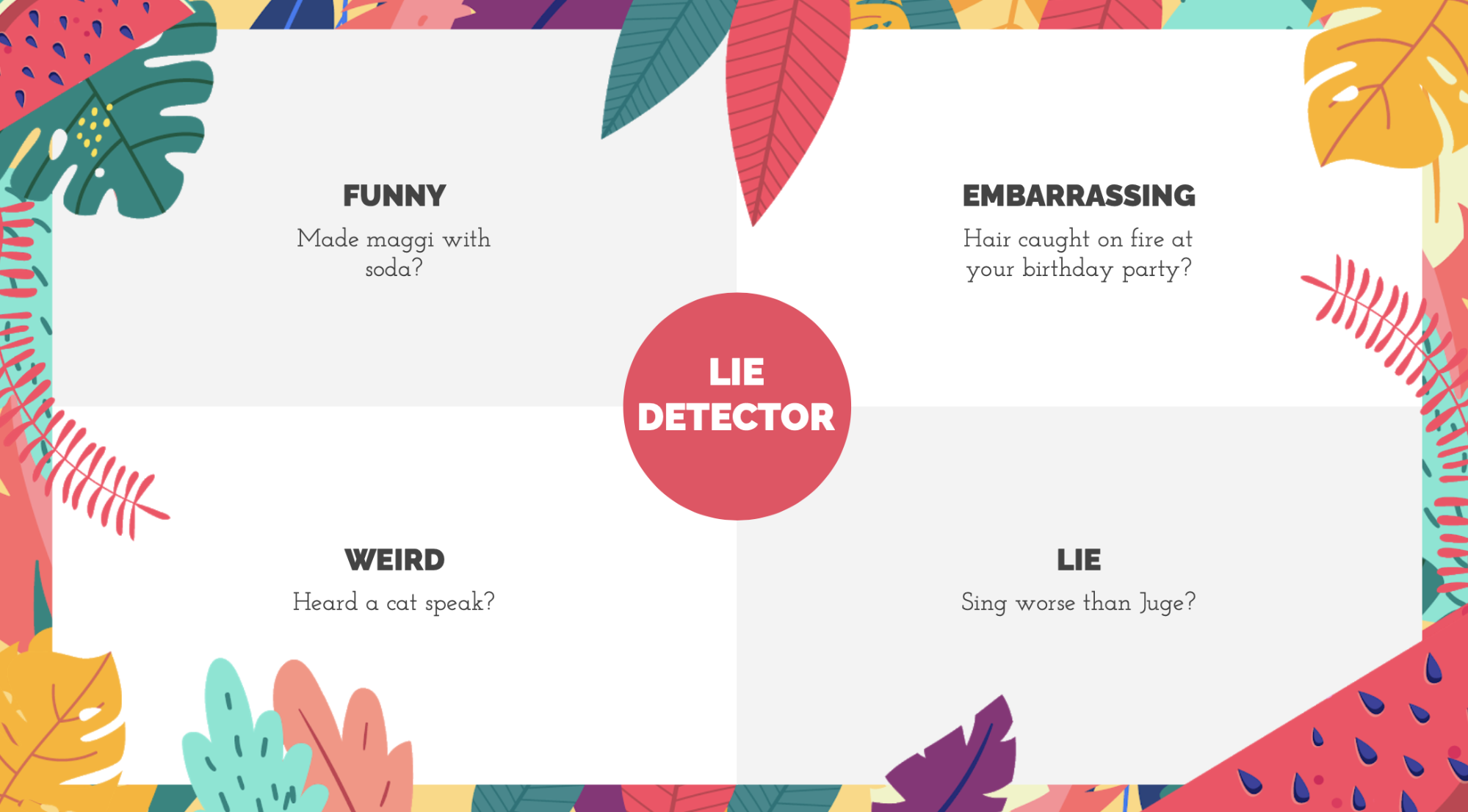 This is a simple game. The host plays the three contestants, a 10 second clipping of a song. Whoever guesses first, scores a point. Highest points at the end of the round progresses to the finals. 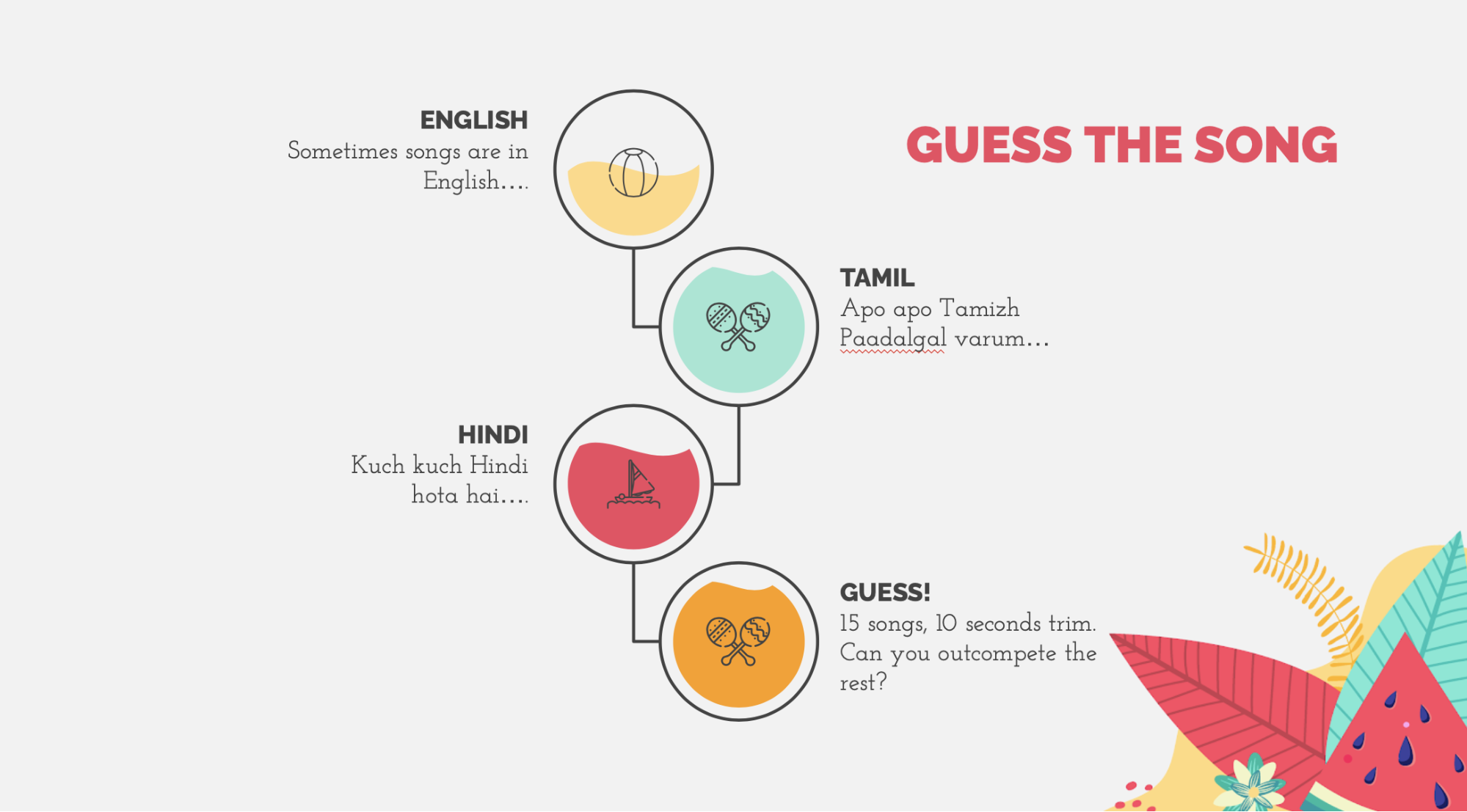 We absolutely loved this game! The host first gives one theme to all three contestants. Then, he/she secretly gives 2 words and 2 phrases to each contestant. Now the game starts.

Contestant 1 says one sentence of the make believe story. Contestant 2, continues with the next sentence adding on to the story. Whoever finishes all their words and phrases, and makes it the funniest wins! 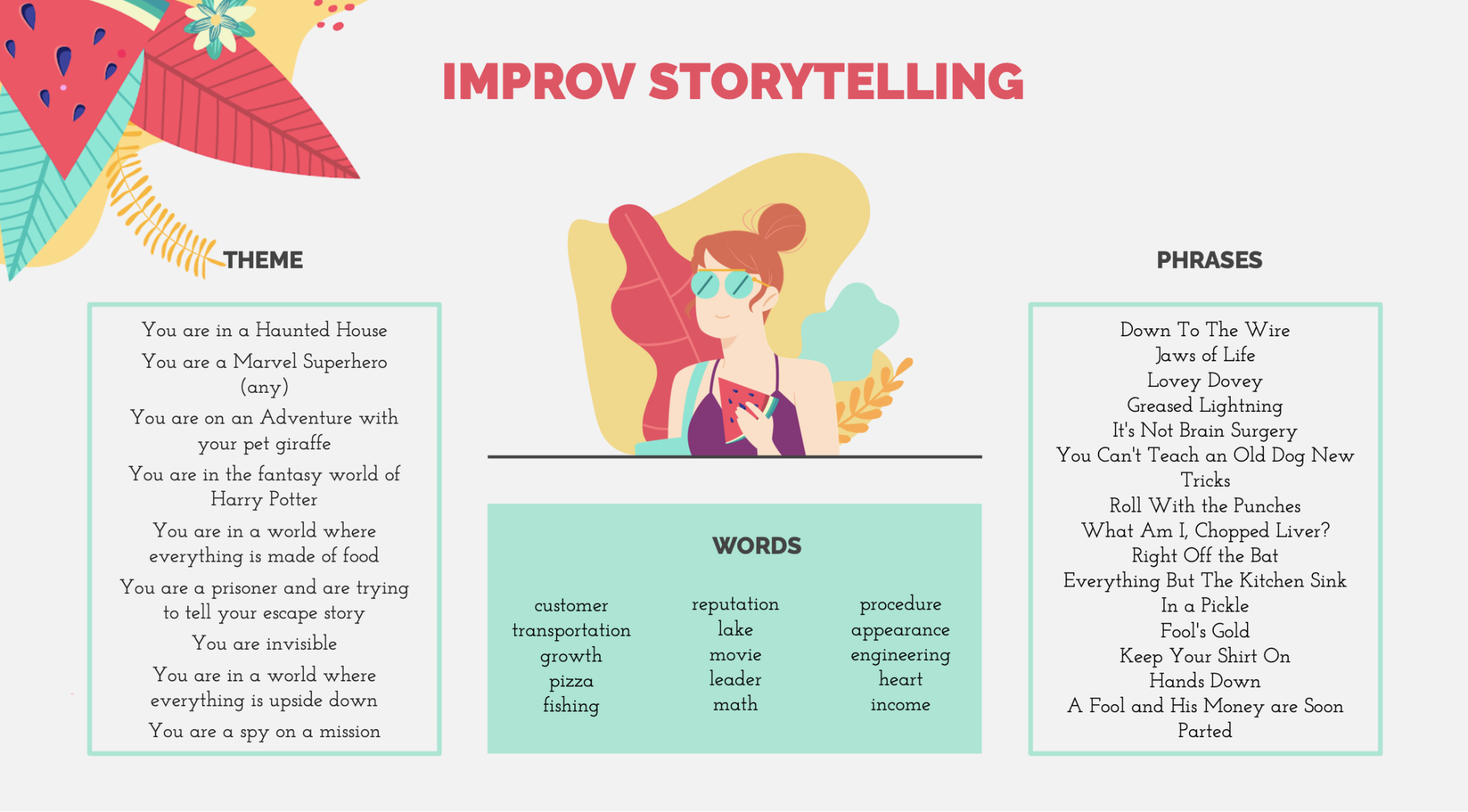 Remember the age old poem, “Roses are red, violets are blue”? Well, whoever comes up with the rudest comeback wins this round! 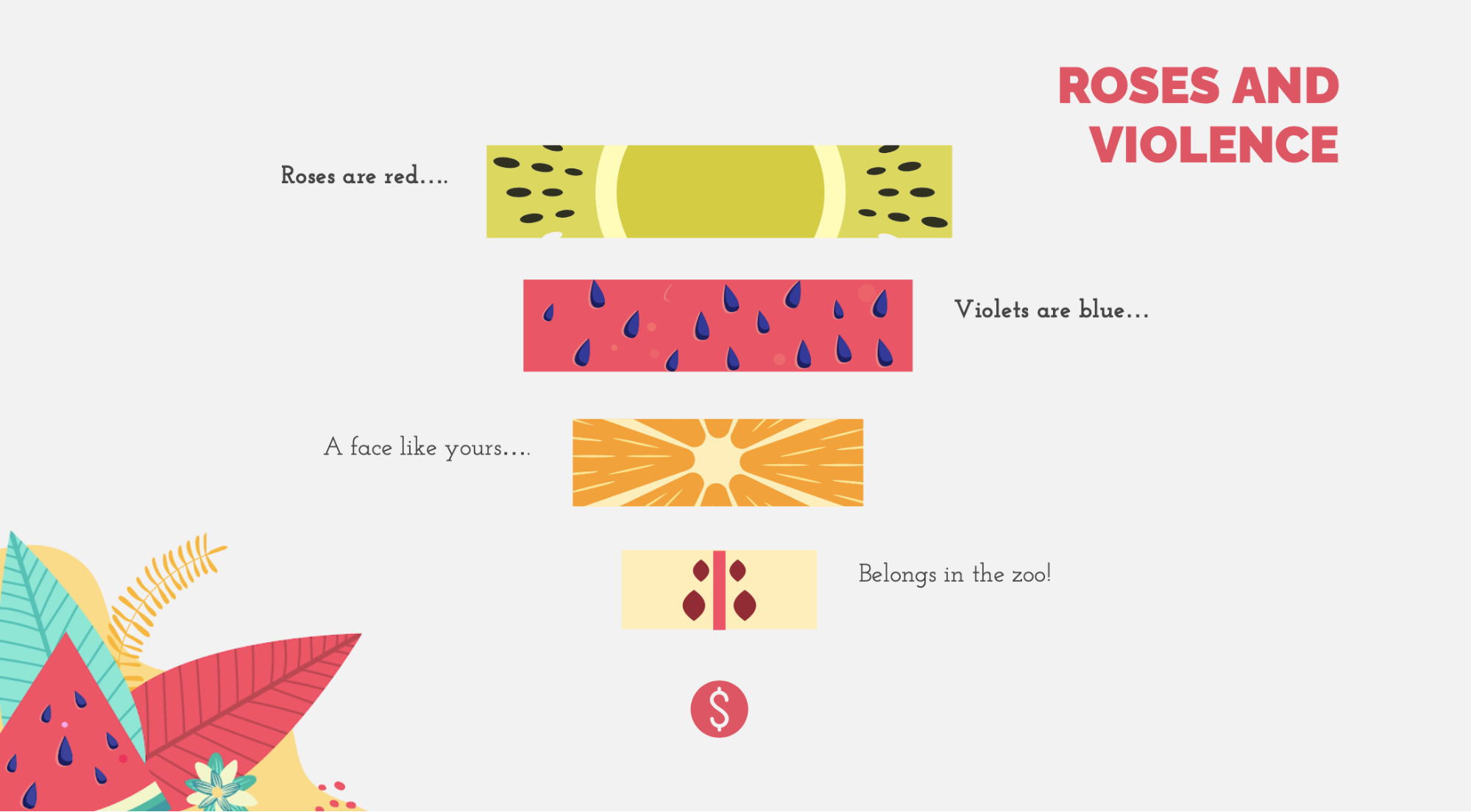 Now, we played 6 mini games and have 6 contestants going on to the finals! For the final round, we decided to play something called “The Irreverant”. Not a word, I know, but that’s the point.

The 6 contestants start by going one after the other and saying the most random sentence possible. Basically, the objective is to say the most irrelevant things to the ongoing conversation. Whenever someone responds, or reacts and says something relevant, they’re kicked out. Last one standing wins! 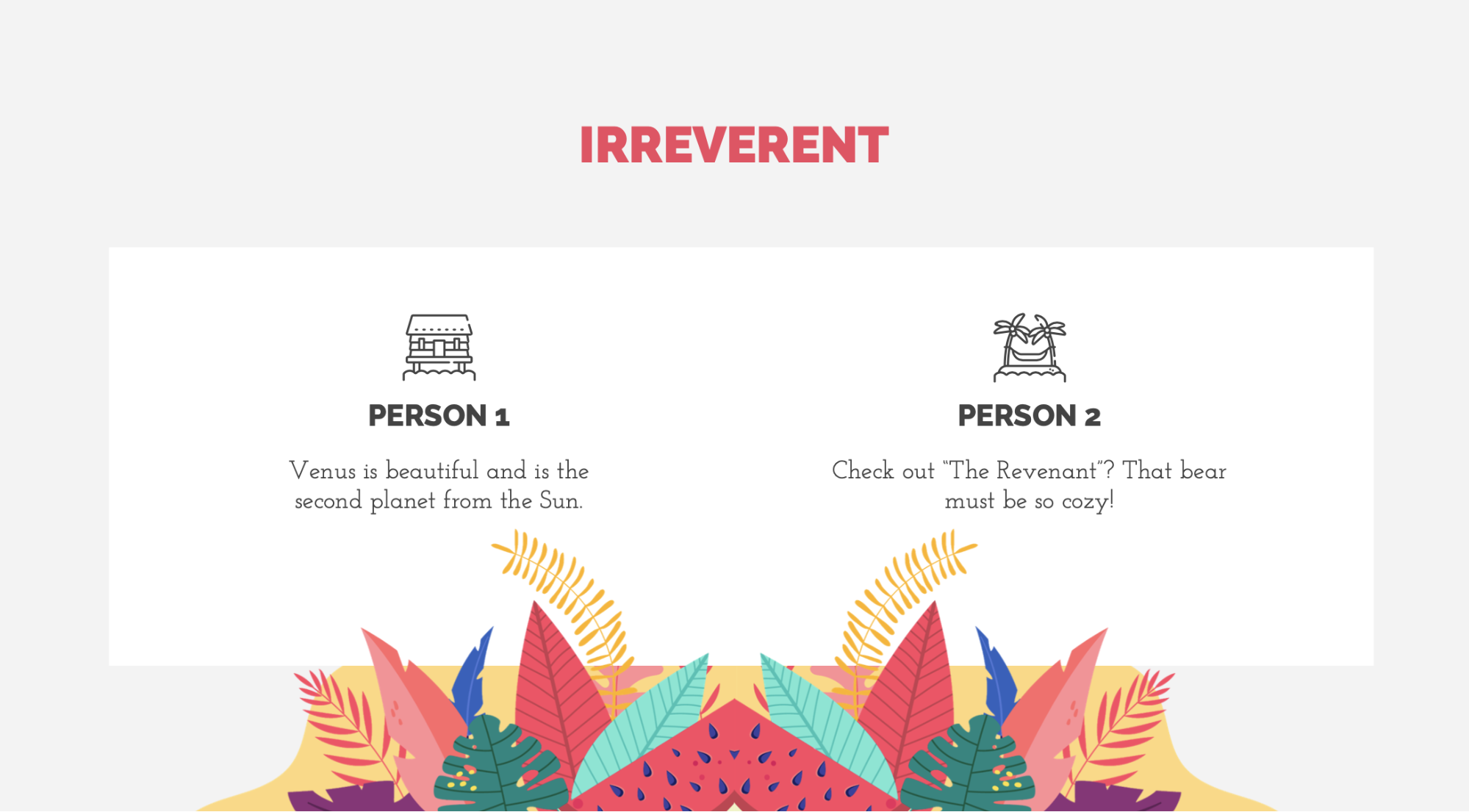 That’s Skcrolypics for you! Play with your team and let us know how you enjoyed it or what modifications you made to it. See you later, Skcrolympian!

Build a “Pluggable” Widget for your Webapp