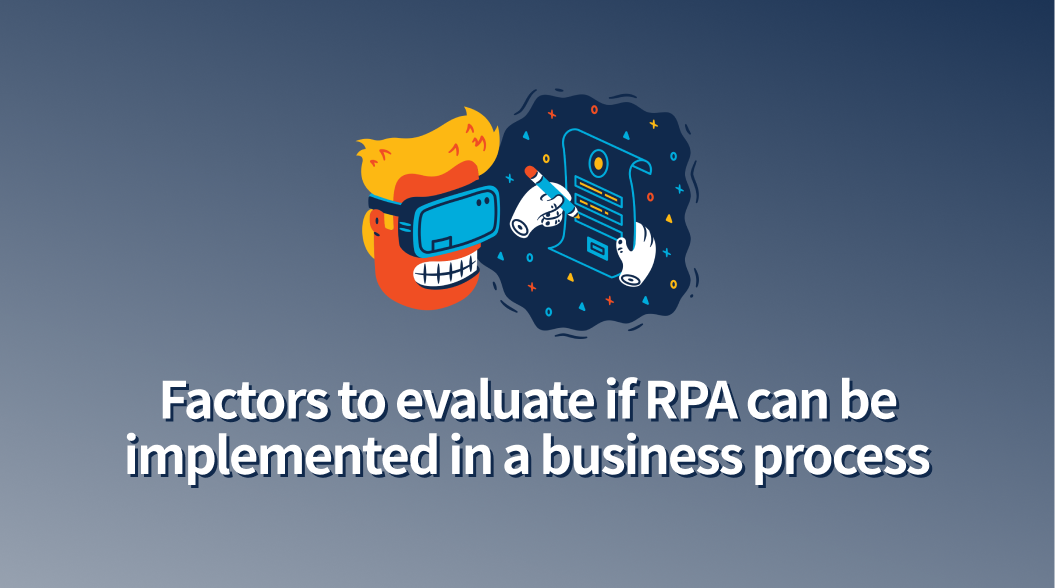 Let's walk through the major factors to be considered and analyzed when starting a new RPA project.

Robotic Process Automation is getting huge traction in the market mainly for its vast use case in Business Process Automation. The entire industry is geared towards making their business efficient and profitable. Fortunately, RPA plays one important role in that journey. But still not all business processes can be automated with RPA based tools and software. Hence every business processes should be evaluated well before planning to implement RPA.

In this article, I’ll walk through the major factors to be considered and analyzed for a specific process.

Usually, a process can be either manual, semi-manual or fully automated. If a process is already fully automated we don’t have to touch it and can be left it as it is or improvements to the system can be made. But if the system is highly manual and also performed multiple times in a given interval, then it’s a good candidate for RPA.

Processes that depend on Business Rules

Almost all the processes involve some sort of data manipulation and decision making and these are usually based on certain business rules, and these Business rules are predefined and don’t change often. In such cases, the processes are eligible for automation because after deployment there is not a lot of changes often and the decisions will be well defined in the RPA process during the development.

Inputs to the process

During the execution of a business process, there will be several input points which the process itself depends on. Based on these inputs points the complexity of the process can be defined. An input point can be classified under three types, which are standard, structured and unstructured.

Standard inputs are the ones where the system knows where to get it from, for example, a document with data stored in a predefined format.

Structured inputs are the data inputs that are in a specific format and the actors involved can easily parse and get the information. An excel sheet with all the employee details is a good example, even though the number of rows is not always constant, it can be understood by parsing it.

Unstructured inputs are data points where there are no standard procedures to capture it. An example of it is handwritten documents or images.

If the process depends on a lot of unstructured data points it’s not a good fit for RPA implementation.

How often the process changes? This is one primary question to be asked during the requirement gathering. If a process tends to change very often, then the time invested in adapting those changes post the RPA implementation is going to be expensive. RPA is well suited for more stable processes that stay the same for a prolonged time and minor changes can be considered.

Process changes should be documented and shared among the developers and the stakeholders to avoid future confusions.

When RPA is getting implemented there should be zero or very minimal changes to the existing systems, if your systems are not compatible and at a position where it needs some significant changes to be made for adapting RPA then the organization should think twice before the implementation.

But luckily this is a very rare scenario as almost all the systems can be automated with powerful RPA tools like UiPath and Automation Anywhere.

Once these items are analyzed and evaluated the business can decide if it’s going to be adopting RPA, since the major goal of RPA is to bring down the cost of each process at the same time having very less investment and higher efficiency

How to add Header to Recyclerview in Android